Conferencing with a kid: An experiment 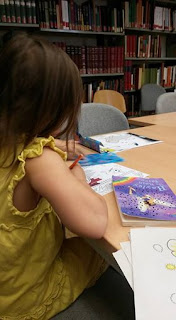 Last week I conducted an experiment.

When I contemplated the path of academic motherhood, I had starry-eyed dreams of traveling to exotic places and bringing my child with me, of giving her the opportunity to go to countries she wouldn't otherwise go to, and to build up some special mother-daughter experiences of a lifetime with me.

In slightly more rational moments, I knew that such dreams don't just come true on a whim, but need to be worked towards. G. has been integrated into my research activities from the start; her first academic event was Latin reading group when she was 11 days old, and her first conference was when she was a few days shy of one month. While I usually leave her behind when I travel, I have accepted some invitations to speak on the condition that accommodations for her be included in the accommodations for me. I've hired childcare on the other end, with the help of local friends. I've flown my mom over from the US to meet us in Portugal so she could watch G. for me; I've brought my husband with a couple of times; I once replied to an invitation to speak with the suggestion that if the budget covered it, they also invite him because we both worked on the same project and we could both speak on different aspects of it. But since she stopped being a sleeping babe in arms, I'd never brought her to a conference without any childcare provisions.

She's 5.5 now, and just finished up her first year of school, meaning she has a full year's worth of understanding of sitting still, being quiet, listening to others, and asking questions -- which is basically what a conference is. I'd already been away for three conferences since the beginning of June, so when I was making plans to go to the Time and Modality workshop in Bonn last week, it occurred to me that I should bring her with.

This seemed like a good venue for experimenting, a relatively short workshop with a smallish group of people, many of them I have known for a long time. If worse came to worst, I could skip a few talks and wander the city with G., but what I hoped was that she would be able to sit with me and learn how to be a conference participant. We had a long talk about proper conference behavior, and I asked her if she still wanted to come with, and she said she did. In exchange, I went armed with everything I thought would help make things go smoothly. We brought plenty of books, three brand-new new coloring books, as many stuffed toys as she could fit in her suitcase, and I promised that in the afternoons, she could watch a movie or two on my laptop.

And she did brilliantly. I'm not sure I have ever been so proud of my daughter. Our plane was delayed so we didn't get to Bonn until the end of the first day of talks, but we joined the group for supper, and she sat and colored and didn't complain even though it was long past her usual supper time, and we didn't get back to the hotel until long past bedtime. (Repeat this refrain for the next two evenings!). The next day, she spent the entire morning sitting quietly next to me, or under the table, coloring, and during the coffee breaks she gave out colored pictures to each of the participants. In the afternoon, she sat in the anteroom of where we were, and watched movies, and then came and sat on my lap while we played pen and paper games that didn't involve any talking. Rarely did she interrupt me (e.g., for the bathroom), and she always slipped into the room and came to me as quietly as possible. The next morning, my talk was the second one of the day. It was an hour-long talk (including discussion), and she was an absolute star, sitting and coloring near the front of the room (and then eventually sitting next to one of the participants who kindly started coloring and making paper rabbits with her), once or twice come over for a hug. (I've long learned how to continue lecturing on logic in the midst of hug interruptions.). In the afternoon we settled her in the office of one of the organizers -- rather far away from where the workshop actually was, but because it was a weekend the building was empty, and we practised the trip back and forth so she knew how to come find me if needed -- and the quiet time (in a much cooler place than the actual venue!) was really useful as it perked her up enough to be able to survive another late night.

Some observations drawn from this experiment:

There were a couple of "above and beyond" encounters that also contributed to this being such a positive experience. One fellow parent happily colored with G. during my talk (he was also the one who then read to her during lunch; after this, G. announced to him, "I want to stay with you FOREVER!"), and he also said "next time you see my name on the programme of a conference you're going to with G., tell me, and I'll bring my kids." THAT is one of the best things that can be done, to help normalize such situations. Not everyone has the luxury of bringing their children with you; sometimes, it's a necessity (it wasn't a necessity for me, this time, but there have been other times). If you do have that luxury, exercise it. This helps make it more accepted for those who have to do it. Here's a place where using your privilege can actually benefit those with less privilege.

All in all, the experiment was a rousing success. I'm glad we did it, and look forward to when we get to do it again (because it will only get easier).