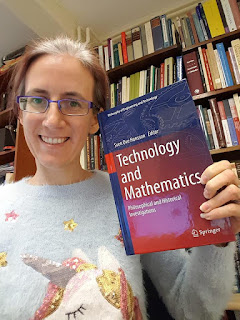 I've got a new publication to announce! (It actually came out a week or two ago, but I only got my author's copy on Tuesday, so no author selfie before then.) It's a book chapter in Sven Ove Hansson, ed., Technology and Mathematics: Philosophical and Historical Investigations, on "Computation in Medieval Western Europe":

Practices that fall under the broad umbrella of ‘computation’ in the western European Middle Ages tend to be goal-oriented and directed at specific purposes, such as the computation of the date of Easter, the calculation of velocities, and the combinatorics of syllogisms and other logical arguments. In spite of this practical bent, disparate computational practices were increasingly built upon theoretical foundations. In this chapter, we discuss the theoretical principles underlying three areas of computation: computistics and the algorithms employed in computistics, as well as algorithms more generally; arithmetic and mathematical calculation, including the calculation of physical facts and theorems; and (possible) physical implementations of computing mechanisms.

It was an interesting paper chapter to write because it stretched the boundaries of my comfort zones -- I had to read up a lot on calendrical computation! (Which is super interesting.) But it's a fascinating exercise, to pick a modern concept, such as computation, and then see what, if anything, counts as its historical precursor.

So apparently the thing to do in late November/early December, if you're a fiction author, is to write up a post outlining everything you've published in the last year. As my wonderful friend Heather Rose Jones put it in her such post, this is "Purely for people's curiosity and amusement, of course. Not at all with any expectation or pressure for people to consider our works for award nominations."

Phew! Thank goodness! Because while I do know that there are things out there such as awards (I could even name a few of them, if I thought about it. There's...Hugos. And...Nebulas. And...others.), I wouldn't have the first idea whether anything I've written is "eligible" for them, and it seems like it would be a lot of work to find out. So I'm going to take a leaf from her book and simply do a round up of what I've published this year, fiction-wise. (I hope to do a separate post for my non-fiction.)

2018 has been a pretty amazing year, fiction-wise, according to the stats.

In 2018, I had 13 pieces out on submission. One was a poem that I sent to one venue (rejection), and two were pieces of flash fic written for specific purposes/venues (both rejected). So let's call it an even 10. These 10 were submitted a total of 46 times. 37 submissions were rejected, 1 I withdrew, and 4 are still outstanding. But that means out of the 10 pieces I had in play this year, FOUR were accepted. That's super exciting.

UPDATE!! (4Dec) Got another acceptance! A flash fic piece, "An Orb of Ice-Blue, Held Aloft in a Perfect Hand", will be coming out in Manawaker Studio's Flash Fiction Podcast. I wrote this story in the middle of a March snowstorm, and am super pleased it's found a home.

Of those four, three have been published in 2018 (and one may still make it out before Christmas), and two which were accepted last year were also published this year, for a total of five pieces in 2018:

I had the amazing realisation, about a week ago, that the earnings I made selling my short fiction this year were enough to cover the costs of a weekend trip to visit a friend and her son, bringing my daughter along with me. We got back late last night, and since she's a fellow writer and one of my biggest champions, it was so satisfying to have funded the trip in this way. (It also makes me realise just how crazy academic publishing is, via which I have made precisely ZERO income.)

This post also seems to be the right place to mention my reviews of short SFF fiction; SFFReviews hit its 1st anniversary in September, and since it's inception, we've reviewed over 560 short SFF stories, and over 275 of those reviews have been mine. Being able to contribute to the reading, writing, consuming, and enjoying of speculative fiction in this way satisfies me almost even more than having my own stories published! (Almost.)