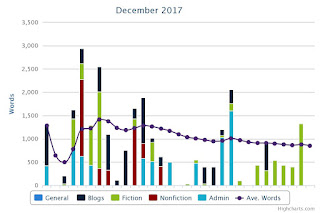 I'm happy with my writing progress in December. Overall, I wrote 26,334 words, which is drastically less than November (expected), but still better than September (satisfying), and I managed to meet my goal of at least 400 words a day every 5 out of 7 days (albeit some days just barely). The words were pretty evenly split:

What I find most fascinating in the chart above is that you can clearly see the four weeks of the month, and you can also clearly see when term ended. In the first two weeks, I've got a pretty high and pretty varied writing output each day, but was definitely struggling on some of the weekends (thanks to birthday parties and Christmas shopping). Then term ended and we've got week three, during which G. was home from school all week and I was in Oxford Monday and Tuesday examining an MA. Those two light blue bars from the end of the week were me writing up the post-defense report while G. played legos next to me at the kitchen table. I'm quite pleased that I managed to do that before we left for the US, which is what took up week four. Week four I'm mostly pleased that I managed to write fiction EVERY DAY, including Christmas Day which involved 12 hours flying and arrival at my sister's place in the US in mid afternoon.

Posted by Sara L. Uckelman at 4:12 PM No comments: