Bob Ross and the Art of Learning Online 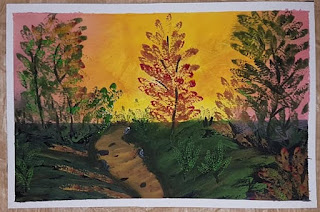 My 8yo and I both enjoy painting. She's a very enthusiastic artist, in all media, but is sometimes hampered by being eight. My painting experience is limited to medieval illumination, and has been very hard fought for over the last 12 years or so. (In particular, I'm utterly baffled by anything involving realism. And anything involving watercolors. Baffling, I tell you.)

A few weeks ago, we started watching Bob Ross on Netflix. After about 5 episodes, we were like "I bet we could do that!" -- despite the fact that (a) neither of us have any experience painting with oil paints, (b) we don't have any oil paints, (c) we don't have any canvases, and (d) we have almost none of the right brushes. But why let small hindrances like that stop us? I have a decent selection of gouaches, some high-quality watercolor paper that I was smart enough to purchase before lockdown started, and a decent selection of brushes for small-scale paintings. So we sat down one weekend to see what happens if you follow a Bob Ross episode and try to reconstruct it with entirely wrong materials and tools: 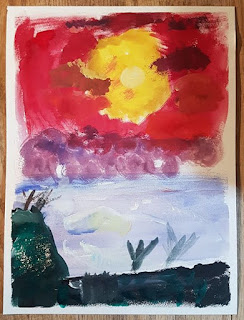 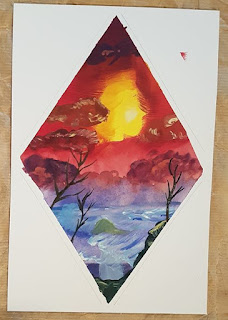 The results were quite literally miraculous. I have never painting anything (a) so large (6x9") or (b) so realistic in my life. G, for her part, was amazed that if she tried to do the same things Ross was doing on TV, she got basically the same results.

The best part was, each painting only took half an hour. So this was something that I was willing to not only do with G on weekends as a special treat, but it was something we could plausibly fit in between supper and bedtime.

We took the techniques we'd learned and applied them to fall scenes: 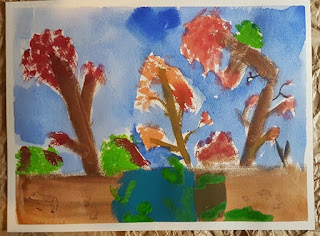 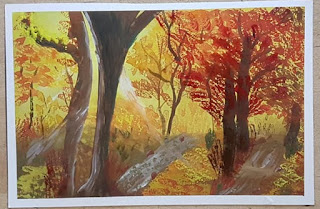 We tried out winter, too: 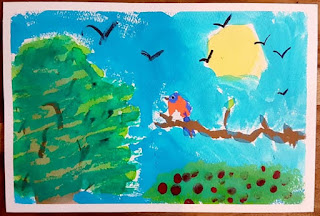 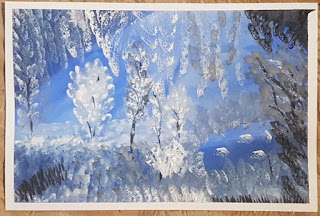 All the while we worked, I'd hear G repeating back to me things she'd learned: Thin paint sticks to wet paint; things get darker as you come forward, away from the light source; there's no such thing as a mistake, only a happy accident; every happy little tree needs a friend. In like 2.5 hours of watching TV, she and I had learned more about the mechanics of painting than I'd learned in 12 years of self-teaching and a variety of classes. We've continued to watch (so soothing!) and we've continued to experiment. 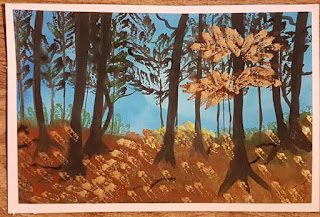 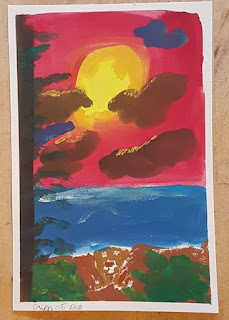 As should come as no surprise to anyone in academia, I'm facing the likelihood of having to teach remotely come fall -- and teach what is in many respects a highly visual subject (formal/symbolic logic). Teaching online/remotely isn't something I have any experience with -- my being dumped into the deep edge for the final week of term in March does not count as experience! -- and teaching logic presents unique complications that do not necessarily affect my colleagues in my department.

Which is the other reason why I found Bob Ross's shows so fascinating: How successful he was at teaching someone such a visual -- and physical -- exercise remotely in the way he did. It seems like this is something that should be enormously difficult. And yet, he did it effortlessly, and effectively. So what have I learned about the art of teaching/learning remotely/online from watching Bob Ross?

You don't need bells and whistles. The shows are Ross, his canvas, his palate (already prepped with paints) and his brushes, brush stand, and cleaner. The background is dull black. There is no background music. It's just him, doing his thing. Super effective.

Break the fourth wall. He's not teaching into a vacuum, he's teaching to a very real, very concrete (albeit not present) audience. When he asks his audience to send him photos of their attempts, he means it.

Care about your students. It is obvious that Ross does; when he says "so glad you could join us today," he means it. When he hopes that we're happy with what we're doing, he means it. That real audience that he's clearly talking to is an audience whose happiness and wellbeing he cares about, and his shows are opened and closed with an explicit statement of that care.

Mistakes don't exist. Or rather, things can happen that you didn't want to happen or didn't plan on happening, but none of them are ever significant enough to ruin things. He spent a lot of time talking about how to deal with these hiccoughs, so that there are no mistakes, only happy accidents.

Repetition works. Any individual show didn't have much repetition, either in techniques, composition, or verbal phrases, but by the time you've watched *cough* 20+ episodes in two weeks *cough* they start feeling like little puzzles, built from the same basic pieces but combined in different ways. This is particularly noticeable in the way that he says the same things over and over again; this really does help reinforce the more global techniques that he's trying to impart.

30 minutes is a good length if you are actively working alongside; if you're not either painting along, or paying very close attention, it's easy to zone out long enough to miss something crucial.

Is oil painting like doing logic? In many ways, not. The glory of his approach to painting is that so long as you're happy with the result, it's a success. That isn't the case with formal proofs. Another feature of his approach is that he's always encouraging people to work out their own idea of a scene, not slavishly copy his; what is true in his world may not be true in my world. That is another thing that isn't true of formal logic -- you don't get to decide what is right and what is wrong. But logic does benefit from lots of repetitions of the same techniques in different combinations; it benefits from starting in one direction and having it go wrong and needing to go another direction to recover. It benefits from having someone who cares about their subject, and their audience. It benefits from having someone convinced that just giving it a go will make you happier.

So there's a lot I've taken away from watching his shows that I intend to incorporate into logic videos that I'll be doing for fall. 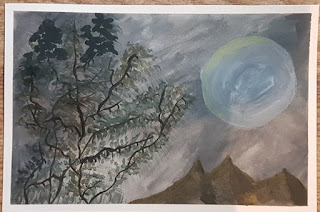