So, I wrote a book 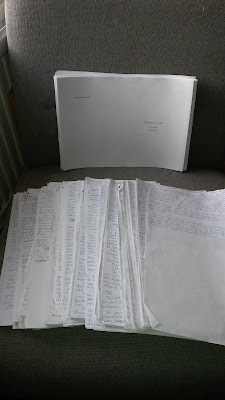 Back in May, I was thinking about writing a book. In October, I confessed that I was no longer just thinking about it, I was in fact writing three. In this post, I'm going to talk about the surprise book, the one that wasn't even on the radar back in May, and the one which is pictured above.

It started when I was at the IAPh conference in Melbourne, sitting in one of the keynote talks. It was my ninth day of conferences in a row, and my attention was lagging. I put a fresh piece of scratch paper in my clipboard, and started writing. No plan, nothing more than three scenes: The one I opened with, and two others which I knew would come later. How much later, who knew? I had no plan. I had no intention beyond seeing where things would get me. Two days later, on the taxi to the airport, I came up with a title, and four names of...things. Locations? Concepts? Mental spaces? I wasn't sure.

The rest of summer I would occasionally sit and write, such that at the beginning of September I had about 24 handwritten pages. And then I ended up at another conference (AiML in Budapest). I'd brought an embroidery project along for occupying my hands while listening to talks, but it ended up going way quicker than I expected, and I ended up the final day with nothing to occupy my hands. So I dug out more paper and began to write.

And write, and write and write. Returning home from Budapest, I gave myself leave to do nothing other than write for a couple of days. At the end of that week, I sent off a first fragment to a beta reader, who, to my surprise and delight, was extremely positive and wanted more. And I wanted more.

Very soon, I found myself in a position where all I wanted to do was write. Luckily, early in September I'd met my submissions goal for the year (12 items or one per month, whichever was met first), meaning I could take a few weeks off with some amount of impugnity. Term would start in October, and I figured if I spent three weeks solid writing, then I'd get back to "real" work.

October came. Term started. And the writing didn't stop. I wrote around class prep, I wrote during departmental and committee meetings, I wrote in the evenings. By the end of the month I was 55,000 words in and I couldn't see any of way of stopping until it was done.

Enter NaNoWriMo, National Novel Writing Month. The challenge: start from 0 words on November 1 and get to 50,000 words by November 30. Officially, you aren't allowed to do any writing in advance, other than prep work/planning that doesn't create words that directly go into the book. But of course, the best of challenges are designed to be adaptable to your own needs. I wanted to write 50,000, but I was going to count as my 0 the last word I wrote in October (which was in fact word 56,859). Getting 50,000 more words would get me comfortably into "reasonable novel" length, and my challenge was to figure out how to end the damn thing in that length of time. (Actually, I had a suspicion for awhile that this was going to be a 100,000 word novel. But October got away from me and I ended up with 55,000 instead of 50,000.)

I wrote every day in November except November 12. I wrote while my daughter played at the playground, I wrote while preparing for her 5th birthday party, I wrote during meetings, I wrote during colloquium talks, I wrote while skyping in to a reading group, I scribbled notes on my hand while walking over to pick her up from school, I wrote from 8pm-11pm every night except Saturdays, I wrote while waiting at the dentist, (I once even wrote in the middle of a class...and I was the one teaching it!), last weekend I wrote through three cities, two countries, and four forms of public transport as my daughter and I took a flying visit to Amsterdam. I wrote the 50,000th word at the stroke of midnight last night, and today I printed off the official complete Draft One of The Mapping of Tula Mors.

144 days, almost 300 handwritten A4 pages, translating to 550 A5 pages when typed, 104807 words, (of which exactly 50,000 were written in November), and approximately 1000 hours worth of Nightwish (that's roughly 40 days). Not to mention numerous twitter polls to help me find the right word, or to report on how useful I kept finding wikipedia's article on Door, or to beg for floorplans of people's favorite small chapels.

And I was right. It is a 100,000 word story. About a week before the end of the month I'd found my ending, and wrote it, and then simply had to work backwards and forwards until the story met in the middle. And when that happened, there simply was no place left to insert any more chapters, so I ended up writing a ~4,000 word "This is not a chapter" at the end, in which I step back from the fiction and talk about what is actually fact in the book.

"So, what kind of book is it? What it's about?" people keep asking me.

That's a very good question. It started off as "fantasy" and, at its root, a love story. But it wasn't too far in that my mom first used the word "dystopian" to describe it (which caught me off guard, because I had thought that it was, fundamentally, a happy book, at least up to that point). So, I have no idea what genre it fits into. (I also have deep suspicions about "genres" as useful ontological categories, but this is just a product of my deep suspicion of metaphysics in general.) Other attempts at summarizing it that I have done:

Basically, it's my way of exploring a bunch of ideas I have that I don't yet have any arguments for, so I can't write about in an academic paper.

Writing it turned out to be surprisingly easy; and one of the best parts of it is I can now point to it and say "I can write a book." This will make writing a second book -- fiction or academic -- all that much easier, because I already know I can succeed. But of course, Draft One is only the start: Now comes the hard part of editing it, of making sure every word I've written is one that I like, making sure that everything that I only figured out in the last 15,000 words is actually accurately reflected in the beginning sequences. Surprisingly, given how much I hate editing my own academic work, I'm actually looking forward to this.