April was an odd month. First, there was Easter and the concomitant holiday. Then, the last of my four deadlines was April 6, which meant a furious week of nonfiction writing. After that it was one weekend conference followed by another conference the end of the next week, and another the weekend after that. Because I was going to be working two whole weekends as a result, I took three days off while G was still out of school. Then my term started up again, and so did all the admin work. So it was swings and roundabouts when it came to what I was writing and then; still, I managed an average of 846 words a day, and wrote at least 5 days out of every 7, which, considering all the conferences and childcare, I feel is damn good.

Overall, I wrote just over 25k, my 2nd most productive month of the year so far. I think what makes me happiest about the month was that I managed to complete short stories for two deadlines. Both of them I finished on the day, so in May my goal is to finish one BEFORE a deadline; but considering that one of them I only realised 6 days previously that I needed to rewrite it from the POV of a different character, and I wrote the bulk of it while on the train up to St Andrews the day before it was due (and the day it was due found me getting up early to bang away in my hotel room before the conference started -- AND staying up late after the conference dinner to finish it!), I'm just thrilled I finished it. 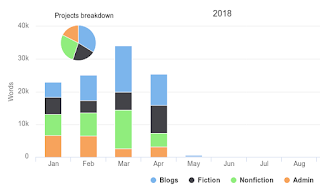 Looking at the bar chart, it feels strange that I wrote so little nonfiction; it felt like my Easter break was way more productive than that stat displays, but I think what's tripping me up is that most of my Easter term productivity happened in March!

I've got two more teaching days this week, and then exam season starts. I've already started concocting grand plans for my summer productivity...bring on May! In the next few days I intend to write up my grand plans, because there's nothing like public accountability to keep me going.