Stats and graphs and publishing fiction

I've now been writing and submitting short (and long!) stories moderately seriously for just over 5 years -- after a decade or more hiatus from writing fiction, I decided one day, August 26, 2014, to start writing again, and I did. Since then, I've written hundreds of thousands of words (literally -- since I started tracking my words via WordKeeperAlpha in September 2017, I have written more than 200,000 words of fiction!), and I've had a satisfying amount of my fiction published. I was thinking the other day that publications don't ever really tell the whole story -- of the time between when a piece was first submitted and when it was finally published, or how many rejections there were between first submission and first publication. So I thought I'd do a post about this, doing some graphs and stats on the last five years. (Well, rather, the last two and a half, which is when I started using the Submissions Grinder; this won't affect the stats very much, as prior to that I had only one story that I had ever submitted, and it was accepted on the first go.)

Between 2017-05-04 and 2019-09-16, I've submitted 23 stories. 11 (=48%) of them have been accepted. (Some of those which have not (yet) been accepted were one-off things written for a specific venue and when they weren't successful there there wasn't any great pressure to try resubmitting them, so if I didn't count those "dead" stories that acceptance percentage would be even higher! I hadn't realised how high it was, this is quite rewarding.) The first two graphs focus just on the accepted stories, and the third graph will focus on ones not yet accepted. (If you click on a graph you'll get a larger, easier to read version.)

The first graph plots how many days there were between when a story was first submitted, and when it was finally accepted:

The second graph plots how many rejections each accepted story got before it was finally accepted: 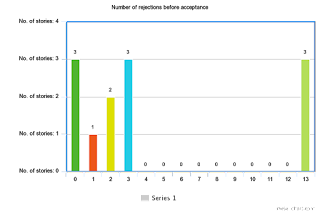 And then final graph plots how many rejections stories that have not yet been accepted yet have accrued already: 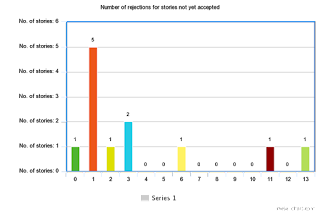 Edited to add another graph: Plotting the number of rejections vs. the length of time between initial submission and first acceptance: 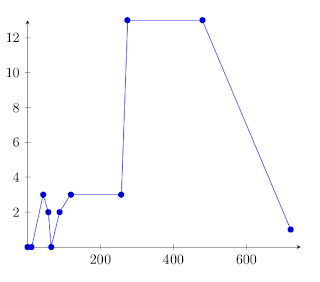