Today I am on strike, Day 4 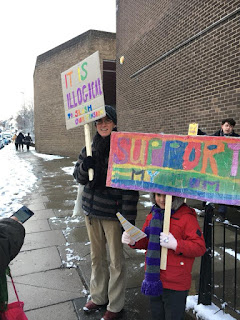 Yesterday and today, my daughter joined me on the picket line.

The first four pickets have all been scheduled in the morning, a time that makes it nearly impossible for university staff with young children to join. I am lucky that G's school is a 10 minute walk away from where the pickets closest to my office are, so I was able to bring her with me and then pause half-way through to run her up to school.

She thought it was grand fun, despite (or perhaps because of!) the thickly falling snow. The first morning she was our champion leafletter; no one would refuse a 6yo who stepped forward saying "Good morning" politely and holding out a flier. But she saw that other people had signs, and she wanted a sign of her own. So yesterday after school, we painted signs together. 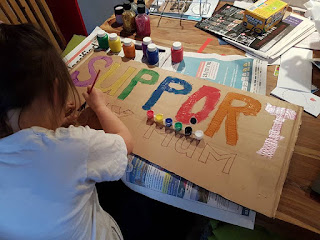 It is (not only) my future I am striking for, it is (also) hers. It is the future of all the students I hope to teach. I want to be in that lecture hall for the next thirty years, teaching generation after generation of people intro logic. I want all my future students to have the opportunity to learn from the best researchers in the world, to have their university career supported by the best academic staff in the world. UK university staff are already among some of the worst paid amongst the western world. Our generous pension scheme is one reason why, despite the pay, we are still able to attract world-class people. Take that away, and who will want to come here? Who will want to work in a UK university for a pittance and no promise of security after retirement -- a retirement that is forced upon them at a certain age, without choice. Who would want that? I don't. And I couldn't fault anyone else who looked at what future UK universities can offer and say "I can do better elsewhere."

It's for all my future students, for all future students even not mine, for my daughter (whether she continues to cling her to desire to go to mummy's university and take mummy's classes or not), that I am (still) on strike.