Publication announcement: Makin & van Schurman on the nature of women

While I was on strike, my contributor's copy of a book edited by my friend and colleague, Emily Thomas, arrived. It's a collection of papers on Early Modern Women on Metaphysics: 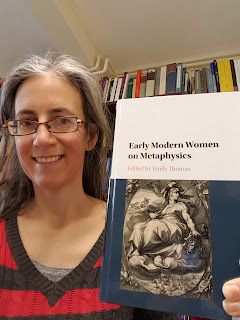 "But wait, Doctor Logic," I hear you cry, "You don't do metaphysics! You don't do early modern philosophy! What are you doing in this book?"

It's a good question. But Emily had been working on this collection for awhile when a few people pulled out, and last spring she offered me the possibility of writing a chapter knowing full well that I don't do metaphysics and I don't do early modern philosophy. My chapter is on Anna Maria van Schurman and Bathsua Makin's views on the "nature" (or essence) of women: 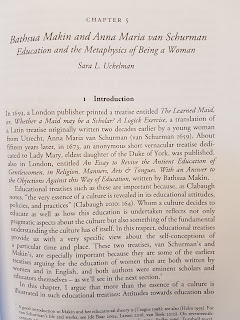 And as it turned out, I've had Makin's and van Schurman's treatises in my "women in logic" folder simply because they are educational treatises and have something to say about whether women should be educated in logic. I'd wanted to look at the two treatises in depth -- van Schurman's especially because she uses explicitly syllogistic argument forms, showing that she had at least some training in logic -- for some years at the point Emily asked me. So this provided me with the perfect opportunity to read the two treatises to see if there was anything that I could say about them that connected with metaphysics rather than with logic or education, and it turned out the answer was "yes, quite a bit".

I really enjoyed writing this chapter, and it was satisfying to tick off something from my endlessly growing possible project list, especially one that I'd never thought would get much higher than the middle of the queue. I actually learned some metaphysics, and some early modern philosophy, while writing it, and because it had a quick turn around deadline, I had the satisfaction of going from 0 to finished in about 4 weeks. It's been interesting seeing the number of people who've responded to the book "I've never even heard of Makin before", and now my only worry is that I'll get pegged as someone who does early modern women philosophers, or, worse, as a Makin expert! :)