Last night was actually rather scary.

I've written in an earlier strike day diary about the emotional toll that being on strike takes, but even factoring that in, I've been doing pretty well, all things considered. The support on the pickets has been quite integral to this, as has the support -- especially student support -- on twitter.

But to see a proposal put forward -- that made all of our sacrifice, all of our fighting over the last three weeks feel meaningless, like it was worth nothing. And seeing that -- it has been a long, long, long time since I've had an emotion crash like happened last night. (In fact, the only other time I remember when I could feel hormones kicking in and wrestling my emotions from out of control was the three months I was on the wrong hormonal birth control, nearly 20 years ago. I remember crystal clear one day where I was walking around the house, kicking the all and crying and I had no idea why. That was when I realised not the birth control for me.) And that was pretty scary.

It was around that point that I wrote yesterday's strike diary and posted it to twitter. Not long after, I received this reply. At that point, I started ugly crying all over my laptop. I'm saving that tweet in my "read this when you feel like a crap teacher" folder, because that reply mattered so much.

The last 24 hours have been a bit of a roller coaster. The shock, the depression, the anger, the growing sense of something -- I couldn't quite call it hope, but perhaps I could call it strength -- as people started signing an open letter rejecting the proposal, as people started sharing contact info of the people to write, as the protest in London started being planned (at one point I thought "I could get to London tomorrow morning...", but then realised it was not a clever idea to get up so early or spend so much money on a same-day train ticket). I read cogent replies to the proposal on twitter, I saw local branches posting their unequivocal rejection of the proposal, I read people's letters they were sending to their reps, and began to compose my own. Eventually, I sent this, first to my local rep, and then to everyone else relevant I could think of -- my regional rep, the head of the UCU HEC, my Vice-Chancellor:

I am writing to urge you to vote to reject the proposal put forth by UCU/UUK tomorrow. This proposal is a spit in our faces and I am horrified, aghast, and saddened that it's even been put forward. Here are some reasons why this proposal should be rejected:

As our branch rep, you represent all members at Durham Uni. Please, please, please be our champion, be our support, be our defense, and fight against this proposal. You will not stand alone. Exeter, Liverpool, and other UCUs have already publicly stated that their membership has unanimously rejected the proposals. Please let Durham join them.

And then I was smart; I split three beers with my husband, got out my crocheting, put MasterChef on full-screen so I couldn't also follow twitter/FB, and distracted myself for an hour before going to bed.

In the morning, G and I got up early and she made me a new sign to bring to the picket. 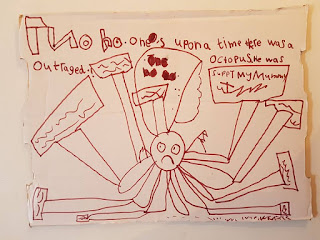 This is the Outraged Octopus. He says "No no no no no no no." He unequivocally rejects the proposal to slash our pensions. In the morning, I also faced having to tell G that a deal had been offered and if it was accepted, I would be going back to work tomorrow. On the one hand, this is a happy thing, and she knows it, because she knows how sad I've been not being able to go to work and how important my work is to me. On the other hand, this was a sad thing, because it would mean that I would be teaching Friday from 2-4 and thus I wouldn't be able to attend the special Mother's Day Tea and Crafts being held at school at that very same time. I knelt on the sidewalk where the picketers would soon be gathering and held her tightly while she cried at the disappointment. But she understood. She's been amazing through all of this.

The picket line was worn down and rather defeated today. Some people were optimistic that this was a negotiating ploy. Many people were more realistic. We spent a lot more time checking our phones than we have other days, collectively.

I have plenty of non-academic projects I've been catching up on during my time at home. I didn't even try to do any of them today. I watched a movie and crocheted instead, and watched the news trickle in. Sally Hunt's disappointing speech to the protestors. 22 out of 64 branches planning to vote no. 43 out of 64. The reps were on the train to London, last chance to email them. The reps meeting and the unequivocal rejection. The HEC meeting. The news that the proposal was blocked. That came in while I was en route to get G from school (via some errands downtown where I got accosted by Unicef volunteers about six different times, and rather rudely brushed them off because I knew if I tried to respond politely to their "how are you"/"do you have a moment" questions I would end up vomiting strike talk all over them, because there was no space left in my brain for anything else. And I figured that that wasn't really fair on them), which means one person was unequivocally happy about how things turned out today -- she shouted and cheered when she found out I'm most likely still available to come to the Mother's Day thing at school on Friday. :)